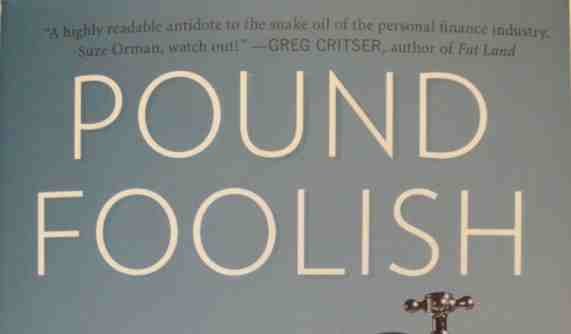 What’s better? To live an opiated existence and see the world through rose colored glasses, or to actually get a glimpse of reality with all of its cringe inducing flaws? If we’re talking about Twinkies (R.I.P.), then please leave me alone while I devour the yellow goodness. I don’t want to know what’s in it, and I’m perfectly willing to trade the minor health concern for an exquisite moment of fleeting pleasure. However, if we’re talking about money, then I (like everybody else) want to hear the truth. Nobody wants to face an empty wallet because they’ve been snookered by a falsely reassuring platitude. In her new book “Pound Foolish”, veteran journalist Helaine Olen takes on the personal finance industry. She attempts to lift the wool from our eyes, and show us that much of the wisdom being proffered is often wrong, and occasionally extremely destructive. This is easy reading that can be hard on the psyche. The prose is fluid, but the content gradually eats away at your financial world view until you’re no longer sure of the ground beneath your feet. And the hardest part to stomach is the fact that we really knew these things all along. Does it come as any surprise that a popular one-size-fits-all financial guru is not going to be able to give legitimate advice? Did anybody truly doubt the harsh reality of their financial situation and not intuitively understand that giving up a latte or two was not going to fix it? Olen’s relentless writing shakes us awake, and forces the realization that “yeah, I really have to start approaching this differently.” When the author exposes Suze Orman, Dave Ramsey, and Robert Kiyosaki, the reader is allowed to engage in the vicarious pleasure of taking down the bloated super stars. However, it’s towards the middle of the book that Olen provides the real value. In a thorough survey of Wall Street, retirement plans, and the investment industry, the reader comes to understand that the system is broken. Careful analysis shows why the savings programs pushed today will usually end in failure. Whether the flaw is fixable is up for debate, but in the here and now there are no sure paths to investing success. And success here doesn’t mean the high-flying mogul-making kind of returns which are the stuff of grind induced daydreaming. Rather, even the slow modest success that is promised by virtually every financial advisor is similarly elusive for most working Americans. Olen doesn’t give any answers at the end. The question is left open for all the gut wrenching discussion that it will ultimately engender. After all is said is done, it seems that there is only one thing which remains certain. I could still definitely use a Twinkie right about now.